Bayreuth Festival 2022: More operas than ever 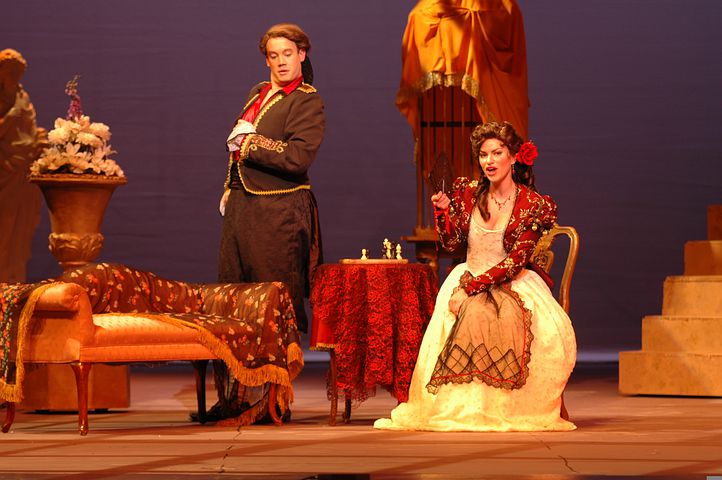 Those attending this year's Bayreuth Festival from July 25 to September 1 can look forward to five premieres. In the Festspielhaus on the "green hill" — a pilgrimage spot for Richard Wagner fans from all over the world — there will be more Wagner operas to watch than ever before.

The first is a new production of Wagner's romantic drama, "Tristan and Isolde." A revamped version of the opera cycle "The Ring of the Nibelung" is also eagerly awaited. Last year saw a scaled-down schedule and audience in Bayreuth, but festival director Katharina Wagner is pleased to confirm a return to full capacity in 2022.

"COVID has unfortunately also led to a loss of audience, many houses are noticing this with a sharp drop in subscribers as well," she told the German press agency dpa. "We are very happy to be virtually sold-out."

For the 16-hour cycle of the "Ring," which premiered in 1876, Richard Wagner had his festival hall built according to his own architectural ideas. Today, the building is internationally famous for its excellent acoustics. In addition to "Tristan and Isolde" and the "Ring" series, the operas "Lohengrin" and "Tannhäuser" will be performed in addition to last year's "Flying Dutchman," conducted by Oksana Lyniv, the first female conductor at the Bayreuth Festival. There will be eight different performances out of a total of only 10 Wagner operas that the composer allowed to be performed at the Festspielhaus.

The fact that the COVID pandemic is not yet over has become painfully apparent in Bayreuth. Just a few days ago, the Finnish conductor Pietari Inkinen, who had been rehearsing the "Ring" with the Festival Orchestra, had to back out due after contracting COVID.

Cornelius Meister, general music director of the Stuttgart State Opera, will now conduct the "Ring" in his place. He had actually been rehearsing "Tristan and Isolde" for this season with the Festival Orchestra; that will now be taken over by Markus Poschner, director of the Bruckner Orchestra in Linz.

"That's an emergency situation that you can't wish for," Meister told the dpa. Fortunately, he has conducted the "Ring" many times before. "That's why I already feel very comfortable and at home in the 'Ring' production," he said. Meister will then take over "Tristan und Isolde" in Bayreuth again in 2023.

'Ring' as a streaming family saga

The festival's latest take on Wagner's "Ring" cycle was supposed to be staged in 2020, but had to be postponed due to COVID. There was a foretaste last year at a multimedia "Ring" performance, which included a production of "The Valkyries" by Austrian action artist Hermann Nitsch. In an abstract stage design, he had colors splashed against white walls.

The young, multi-award-winning Austrian director Valentin Schwarz compares the new four-part "Ring" cycle to a Netflix series: A sequence of several parts watched in quick succession. German sagas form the basis for Wagner's "Ring." He designed his work as a great social drama, dealing with power, greed and intrigue in the pantheon and on Earth.

"The Ring is a massive family epic in almost Greek format and is therefore made for a cinematic approach," Schwarz explains in the trailer for the fourth part of the series, namely "Götterdämmerung," or "Twilight of the Gods."

There will also be a festival atmosphere at the outdoor theater. For the first time, there will be a surprise free program with musicians from the opera productions as part of a "Festival Open Air" on two evenings, which will not only be about Wagner.

Those wanting to know more about Wagner's impact on popular culture can visit the special exhibition, showing at the Richard Wagner Museum, on how the composer has been appropriated to market everything from beer to heavy metal music. For those new to Wagner, the museum has also recently begun offering special tours on performance days under the theme "Festival for Beginners."

"I had the feeling that more and more people were coming to Bayreuth for the first time, rather than for 30 or 40 years," museum director Sven Friedrich told DW. "I thought I'd just tell people about the festival idea and how a festival day works." In the past, the museum director has often been asked which celebrities will be in attendance.

This year he can confirm that former Chancellor Angela Merkel will be showing up. Her successor, Olaf Scholz, will not be attending the premiere of "Tristan und Isolde," but minister of state for culture Claudia Roth will be there.