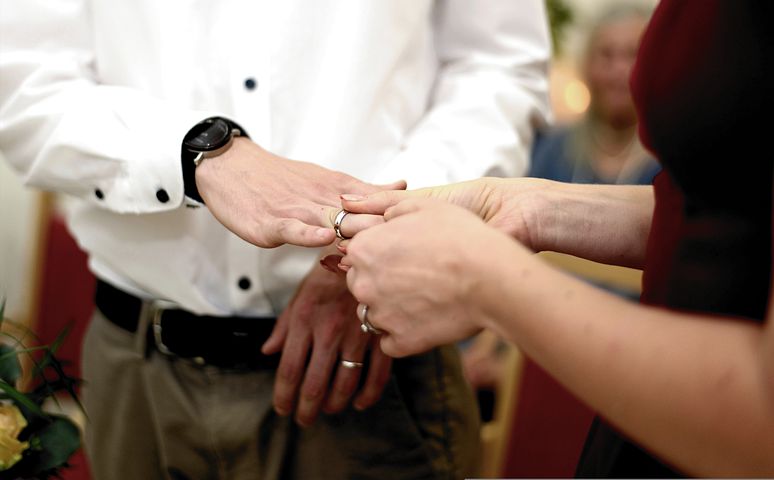 However, this Scandinavian country wasn't their first choice: In Alina's native Germany, international couples face a long, bureaucratic and expensive process to tie the knot. In India, on the other hand, Bharat and Alina were taken aback by the extensive corruption that blight the legalities of marriage.

Losing hope in both their homelands, Alina and Bharat took a friend's advice and opted to get married in Denmark instead. In just two weeks, the Danish authorities pronounced them husband and wife.

Surprised by the easy process, Alina decided to help other couples get married in Denmark too. After working in the Indian Consulate in Hamburg for three years, she decided to professionally consult for those who were in similar situations like her. Today, she runs a consultancy service, through which sheclaims to receive 20 to 30 clients every month, largely made up of Indians, Pakistanis or same-sex couples.

In 1989, Denmark became the first country in the world to legally recognize same-sex couples who could register as domestic partners. This was  replaced in 2012 by a same-sex marriage law, which came into effect on 15 June 2012. Since then, this country has become a haven for same-sex couples looking to get married. According to Statbank Denmark, in 2021, 428 same-sex marriages took place: 171 were between two males while 257 marriages were between two females.

As Danish marriage law does not discriminate between locals and foreigners, international couples have also started to flock to Denmark to get married with minimal bureaucratic hassle. This isn’t the case in other European countries like Sweden or Germany or even in the USA or Canada, which requires foreigners to have residence status in order to get married there.

Who ‘needs' a Danish marriage?

Pakistani citizen Gita Kirshan married her Indian husband Nitesh Naresh Bagda in August 2022. Both belong to the Maheshwari caste, a Hindu sub-group whose members today live in western Indian states and Pakistan, divided by the partition of 1947. Gita and Nitesh’s parents were able to organize this match through the strong cross-border ties that the Maheshwaris continue to cherish to this day, explained Nitesh.

But given the factious political history that both countries share, Gita and Nitesh were aware of the chaos that awaited them. After all, it isn’t every day that an Indian marries a Pakistani or vice-versa. Even though Gita’s nationality didn’t bother him, Nitesh’s Indian friends weren’t too supportive of his choice and wondered why he ‘found a Pakistani of all people to marry’.

A current resident of Canada, Nitesh remained undeterred. He said, "Relations between India and Pakistan have always been complicated. And there is very little hope that it will get better, so we had an idea of the bureaucratic difficulty. But we thought that it would not be so important at an individual level. We were pretty much confident that if I apply (for a Pakistani visa) from Toronto, it should not be difficult.”

After multiple attempts to get a visa from both India and Pakistan, Gita and Nitesh gave up on the idea of getting married in either country. Gita explains, "We looked for countries with minimum bureaucratic processes for marriage, and that is how we came across Denmark. There, you can get married even on a tourist visa!”

Alina noted the especially difficult situation that Indo-Pakistani couples face. She says, "I have seen up close how difficult it is for a Pakistani to get a visa for India. It is quite impossible. It is not only difficult for these couples to get married, but they cannot be so open about their relationship to begin with. Lots of couples keep their relationship a secret.”

According to Nitesh, the problem isn’t with the law, as “technically it is possible for an Indian and a Pakistani to get married to each other.” It appears to be a combination of the unsaid social norms, narratives of hyper-nationalism and corruption that makes the task extremely difficult, if not impossible.

In such cases, Denmark provides an avenue for those who can afford a marriage in this country. As a member of the Hague Apostille Convention, the Danish marriage certificate is valid in more than 120 countries, including India. This certificate is preferred by couples looking to move abroad, as it is available in English, German, Danish, French and Spanish. For Pakistan, it isn't automatically recognised, but requires a legalisation, which wasn't as much of a hassle as getting a visa was for Gita and Nitesh. As of July 2022, Pakistan has applied to be a member of this convention, but no decision has been made yet.

Recognized for who you are

Unlike Gita and Nitesh, Tripti and Surbhi G.* couldn't imagine getting married in India even though they are both Indian citizens. For them it wasn't the bureaucracy; it was the lack of legal provisions which came in the way of their married life together. In India, homosexuality has been decriminalised since 2018, but legal discussions on same-sex marriage are currently under judicial process. The Delhi High Court is hearing multiple petitions on one hand while parliamentarians are trying to debate amendments to the existing legal framework on the other.

But despite same-sex relationships being decriminalised, Indian families aren’t on the same page and often pressure their children or express their disappointment, says Tripti. According to her, marrying Surbhi in Denmark was not just about convenience but also about social acceptance. She says, "We were already living together in India, but this makes things legal and easy as well. You can officially call someone your partner. This feels different. When the minister pronounced us as ‘wife and wife', it was a very happy moment for us because finally, somebody somewhere recognized us at least.”

To their parents, they aren't ‘wife and wife' but "just good girl friends' having moved to the USA together, by chance." Surbhi said to DW, "We wanted to move out (of India) because of course you don't have a life in India with respect.” The Danish marriage certificate helped Tripti and Surbhi start a life together legally in a new country, where they feel accepted today.

Not affordable to all

Despite the advantages of marrying in Denmark, the reality is that not everyone can afford a week-long trip to one of Europe's most expensive countries. Besides, all payments related to the Danish marriage ceremony need to be paid with European or international credit or debit cards, that aren't available to people easily, explains Surbhi.

On average, getting married in Denmark could cost anywhere between €500 to €1,500 euros, excluding visa costs, flight fares and other extra expenses taking it to around €5,000 euros. But Tripti and Surbhi are both successful professionals who could afford to pay for the wedding. Most of Alina's clients, like Gita and Nitesh, are also either already in Europe or in other western countries or have the means to afford such a costly ‘destination wedding.' That is why this Scandinavian wedding destination cannot be an option for most other couples who are separated by law, bureaucracy or social stigma.

* Full names have not been published to protect the interviewees' identities.