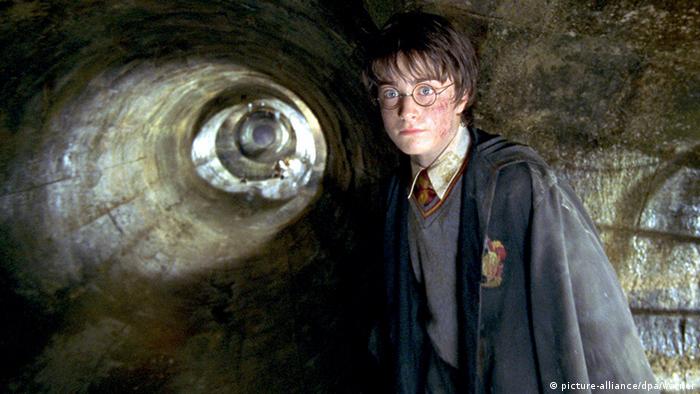 Boy wizard Harry Potter has been with us ever since author J.K. Rowling released the first book in her seven-part series in 1997. Soon after, in 2001, the first film adaptation starring Daniel Radcliffe (above, in the 2002 sequel) was released, with the final movie hitting cinemas a decade later. Along the way, of course, came a massive wave of merchandise…

The Wizarding World of Harry Potter theme park opened in Orlando, Florida in 2010. Two other parks have since opened in Osaka, Japan and Los Angeles. The parks recreate the village of Hogsmeade and Hogwarts castle, promising visitors a one-hour exploration experience on an "enchanted bench." Technically, that's true - the ride queue takes about an hour. The actual journey lasts only four minutes.

In 2014, the Diagon Alley attraction opened at the other end of the Orlando theme park, with the Hogwarts Express train ready to take visitors back and forth. Alongside the Gringotts Wizarding Bank (complete with dragon on the roof), this shopping paradise for wizards and witches offers everything imaginable. Broomsticks can be purchased for a mere $250 (225 euros); a Gryffindor scarf costs $35.

The top seller are the Bertie Bott's Every Flavour Beans, produced by Jelly Belly, specialists in jelly beans with amazing flavors. A delicious treat? Not necessarily - ever since the first book it's been clear these beans can also taste pretty disgusting. Some flavors: earthworm, rotten egg, soap, grass - even vomit. But with any luck, you might find something like melon, cotton candy or cherry.

The London train station hides a "secret" access portal to the magical platform 9 3/4, where the Hogwarts Express waits to whisk students away to school. Those who want to make it through need to concentrate and aim their luggage cart directly into the brick wall. It's become a must-see site for Harry Potter fans - though Muggles, or non-magic folk, won't get very far.

This bridge wasn't recreated at the Universal theme park - it's real. It, too, has become a stop on the Harry Potter sightseeing tour, though somewhat off the beaten track in the Scottish Highlands. The Glenfinnan Viaduct was built in the late 19th century and is part of the West Highland Line. The train in the picture, however, is not the Hogwarts Express but The Jacobite, a tourist steam train.

At the age of 10, Potter fanatic Midas Kempcke began expanding Rowling's magical world. Kempcke, of Hamburg, has written his own stories and screenplays and recreated Hogwarts using Lego bricks, down to the last detail. He has also produced short stop-motion video clips featuring the characters, including Harry and his nemesis Draco Malfoy, seen here. Kempcke has won multiple awards for his work.

Quidditch, a full-contact sport, actually takes place in midair. Players fly about on brooms trying to throw the Quaffle through one of their opponents' three circular gates, while avoiding treacherous Bludgers. The player who manages to catch the elusive Golden Snitch wins the game. Muggles play a version of the game on the ground, as seen here in Bonn. Without magic, of course.

The Pottermore website is the "digital heart of the magical world," home to everything fans could ever want: a space to interact, an online shop and the only place where the Harry Potter books are available in e-book form (sorry, Amazon). In addition, fans also receive the occasional tidbit about the two-part play, "Harry Potter and the Cursed Child," due to premier in London's West End in July.

Ever since a new Harry Potter story was announced for the London stage this summer, fans have been overjoyed. Not everyone will be able to make it to the UK, but Rowling has kept her fans in mind: a day after the premiere of "Harry Potter and the Cursed Child," a book based on the play will be released on July 31 - Harry Potter's birthday. The story takes place 19 years after the last novel.

Books, films, memorabilia, amusement parks and now, a play: for nearly 20 years, boy wizard Harry Potter has been a global phenomenon and marketing success worth billions.

And the brand has also made its creator, British author J.K. Rowling, rich. In 2011, Forbes magazine estimated Rowling's net worth at about $1 billion (900 million euros) - wealthier than Queen Elizabeth II.

The first volume in the seven-part series, "Harry Potter and the Philosopher's Stone," was released in the UK in 1997 with an initial print run of 500. Parts two and three soon followed, and sales began to multiply.

The big breakthrough came in 2000 with the publication of the fourth volume, "Harry Potter and the Goblet of Fire," which set off Potter mania. Rowling's books were the first youth novels to crack the international best-seller lists. Translated into 73 languages, the series has been read all over the world; age limits and cultural boundaries seemingly don't apply.

People were - and still are - enchanted by Rowling's parallel universe, the world of magic that exists hidden alongside the Muggle world.

Muggle, Rowling's term for a person that doesn't possess magical skills, has meanwhile joined the lexicon. People now use the term to describe any person who lacks a particular skill or is inferior, or uninitiated.

In the world of geocaching, where players are sent on a scavenger hunt with geographical coordinates to search for a cache of items, the idea is to make sure the cache remains unobserved by non-geocachers, or muggles.

After the last volume, "Harry Potter and the Deathly Hallows," was published in 2007, fans around the world were forced to grudgingly accept that the story had come to an end. The film adaptation hit cinemas with much fanfare in 2010 and 2011, split into two parts - squeezed for every last penny.

Harry's archenemy, Lord Voldemort, had been defeated, and the epilogue showed the boy wizard many years later, grown up, married and sending his own son off to the Hogwarts School of Witchcraft and Wizardry.

And it's here, 19 years after the events in the "Deathly Hallows," that the story will continue. The first preview performance of "Harry Potter and the Cursed Child" will premiere at London's Palace Theatre on June 7, with part two premiering two nights later.

To satisfy fans eager for any scrap of information, Rowling's Pottermore website and the play's Twitter feed have already revealed a few details related to the eighth Harry Potter story, including photos of the actors playing the principal roles.

These characters are already certain to return: overworked, middle-aged Harry, his wife Ginny and their son, Albus Severus, along with their two other children. Harry's friends Ron and Hermione will also appear, along with their daughter, Rose. Of course, it wouldn't be a Harry Potter story without eternal adversary Draco Malfoy and his son, who apparently has inherited the vile character traits of his father and grandfather.

The play will officially open on July 30, with a book version appearing the next day, Harry Potter's birthday. As with its predecessors, the plot remains top secret - standard procedure for the Harry Potter marketing machine.