In Kyiv, domestic tourists are back, despite the air raid sirens 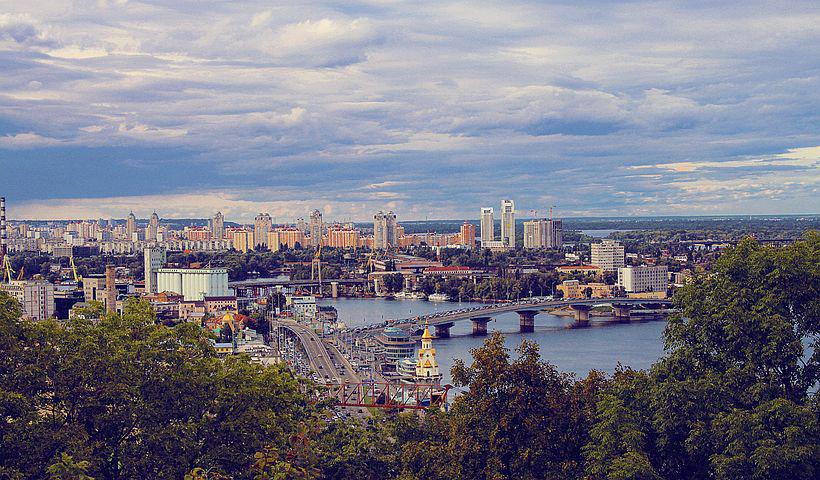 With fighting focused on other parts of Ukraine, life in the city of Kyiv has regained some semblance of normality. Bars and cafes are open and city tours are popular once again.

If it weren't for the air raid alerts, sandbags and barricades next to administrative buildings, you might forget Ukraine is at war. Ordinary life goes on almost undisturbed in the capital Kyiv, where locals frequent parks, stroll along its boulevards or relax in cafes.

"I left Kyiv for Poland on April 4, 2022. At that time, there were a lot of checkpoints around the city, we had to show our documents at every stop, few shops were open, and finding an open cafe to get coffee was almost impossible," Ksenia Fedorova tells DW. Fedorova spent 10 years working for a major television channel, but now makes a living as a voiceover actor.

She has returned to her hometown Kyiv and says things almost feel like they did in pre-war times: shopping centers, restaurants and cinemas are open, and the streets are full. When an air raid siren rings out on Khreshchatyk street — Kyiv's main avenue lined with bars, restaurants and shops — most people react calmly. Some continue walking, while others head for the subway station to shelter until the all-clear is given.

Domestic tourists are back

While foreign tourists have largely avoided Kyiv since the war began, domestic visitors have returned in droves. Many Ukrainians want to go back to living normal lives, as far as is possible, and for many, that also means going on short trips and city breaks. Organized tours of Kyiv are in great demand, though with the war still ongoing, many participants prefer routes with bomb shelters nearby, in case of emergencies.

"City tours are almost back to normal," says Kyiv guide Olena Oros. "I often have groups with up to 20 people, and special thematic tours attract even larger crowds." She says many domestic tourists now feel safe enough to visit the city and take her tours. "Refugees also join in my excursions; Kharkiv residents joined at least three of them." She even received a request to run an English-language tour from a Dutch volunteer based in Ukraine.

Ukraine tourism has developed a decidedly altruistic side. Many travel agencies and guides who continue to work are donating parts of their income to charities. Others grant special discounts to members of the armed forces, families and children.

During the first weeks of the war, life in Kyiv was turbulent. Now, however, things are almost back to normal. Many cultural institutions have reopened. You can once again spend an evening at the Lesya Ukrainka National Academic Theater, at the opera, or visit one of the city's many museums, such as the National Museum of the History of Ukraine.

"When the war started, during the first days, our most valuable exhibits were packed up and evacuated to a safe place," says Nataliya Lihitskaya, a senior researcher at the museum, which reopened in early April. "We created a temporary exhibition dedicated to the battle of Kyiv and its heroes, but we can only allow access to groups of up to 20 people," she adds. "In case of an air raid alert, we have a bomb shelter."

In the evenings and on weekends, open-air concerts are staged in Kyiv's parks, and buskers play jazz, pop and Ukrainian music in the streets. Underground concerts are also held at Maidan Nezalezhnosti subway station.

"Of course, conditions are insecure, flights are restricted and there is constant danger, which makes it impossible to guarantee the safety of foreign tourists," says travel expert Maria Yuhnovets of Sputnik Kyiv DMC. Most foreigners you meet in Kyiv today are journalists, politicians and members of relief agencies.

Those working in Ukraine's tourism sector don't expect foreign tourists to return anytime soon. That would not only require an end to Russian shelling and attacks, but also martial law being lifted, not to mention the reopening of Ukrainian airspace.