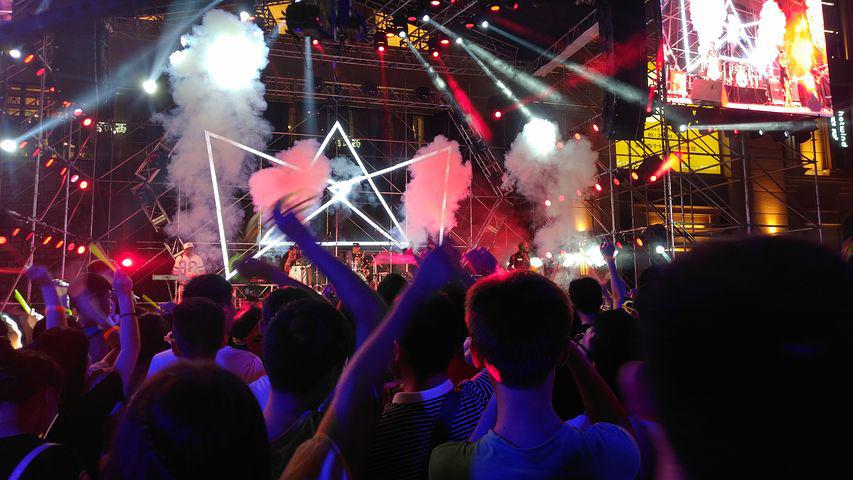 Over a pulsating beat, Ramona Kozma (pictured above center) sings melancholically of a worthless life that is given meaning by a pair of dark eyes. The rhythm is pure tango. But the language is Yiddish.

Kozma is the accordionist and singer of Trio Picon, a German ensemble that performs Yiddish tango, and the trio is one of many musical groups performing at the inaugural Shalom Music Cologne festival (Shalom-Musik.Köln). The week-long event, an offshoot of the city's 2021 celebration of 1700 years of Jewish life in Germany, is dedicated to presenting Jewish music.

Yiddish tango was a popular genre of the 1920s-30s, with composers from Latin America, as well as the United States and Eastern Europe penning words in the language of Ashkenazic Jews to the emotionally intense Argentine music. Yet it's not a musical style people usually think of when they hear the words "Jewish music."

"I've noticed that there is a relatively large knowledge gap," Kozma says. "For example, a lot of times Balkan music or Romanian music … is associated with Jewish music. But that's just not right."

Yiddish tango is one of many genres included in the festival program. The others range from classical art song to contemporary jazz to club music to synagogue organ works. The musical diversity reflects the diversity of the Jewish experience, both throughout history and today, while also raising the question: What exactly falls under the umbrella term "Jewish music"?

Jewish music? Depends how you define it

Jean Goldenbaum, a researcher and professor at the European Center for Jewish Music in Hanover, is very familiar with this question — it's usually the first he gets on the topic. "The first thing that I explain is that there is not a definitive answer. And there is not a concrete answer," Goldenbaum says.

There is no one overarching factor that unites Jewish music, he explains. Instead, it relates to what parameters are set and then what elements are accordingly present. Or, as Goldenbaum puts it, "Does it bring something or some things that show us or locate us in this [Jewish] cultural universe?"

A very restrictive interpretation could define Jewish music as liturgical music in Hebrew meant for the synagogue, while a broader definition could include non-religious music with lyrics in Hebrew or other Jewish languages; non-Jewish language lyrics that nevertheless draw on Jewish texts or themes; or the use of musical motifs and stylistic features commonly found in the Jewish musical tradition, such as certain musical keys or melodic patterns and embellishments.

In the case of Yiddish Tango, the elements go beyond the language

"Yiddish tango is definitely written in the — I'll call it — tonality typical to synagogue music, which klezmer music also shares … the vocal part is also influenced by synagogue singing and a particular way of making certain sound effects or raw crying sounds with the voice," Kozma says.

Compositions by non-Jewish composers who used Jewish elements can also fall into the category of Jewish music. The opening night of the Shalom Music festival included a well-known example: "Kol Nidrei," by Max Bruch. The Protestant composer wrote the piece based on Jewish melodies in the early 1880s for Liverpool's Jewish community. The name comes from the declaration recited during Yom Kippur services.

The tricky issue of identity

The reverse scenario — a composition by a composer of Jewish origin that contains no apparent elements orienting it within Jewish musical tradition — is perhaps the most contested when it comes to definitions of Jewish music.

"Another very, very large question is if the piece has no Jewish musical elements and has also no Jewish texts, but the composer is Jewish. What do we do about that?" Goldenbaum posits. Categorization in this instance is tricky because it boils down to identity, a topic that is never clear-cut.

"This question and this answer will be, in the end, bigger than the conceptions of the composer himself," Goldenbaum says. There will be disagreement, he adds, which is fine: "Because it's all about perspectives. It's all about concepts. How do you choose to understand music. And it's all about identity."

A prominent example of the difficulty tied up in identity is the music of Austrian composer Gustav Mahler. Born Jewish, he converted to Catholicism to secure a prestigious post in the Hapsburg court, and his compositions do not openly draw on Jewish elements. The Shalom Music festival's opening concert featured classical songs in which Mahler used traditional German folk poetry.

Festival co-artistic director Thomas Höft underlines that there is more than one lens through which Mahler's music can be examined. "This repertoire has many more characteristics," he says. "But is there something that is specifically Jewish about Gustav Mahler? Is there? Is this being denied? Did he himself repress this? What is there? Can we assess it? Or is this a false assumption? This is an experimental categorization. We are putting on glasses that have been impacted by different experiences and using them to look at a very broad repertoire."

"Electric Counterpoint," by the contemporary American composer Steve Reich, is another example of an ambiguous composition. While other works draw on his Jewish heritage, this looping piece for electric guitar and recorded samples, performed by Cologne-based Israeli guitarist Tal Botvinik at the festival, uses central African horn themes.

'It's all about the question'

Then there's the self-described "sexually loaded freak party" that is The White Screen. There is nothing particularly "Jewish" about the duo's music, Höft says, which fuses art-rock, gospel-punk and psych-pop. But as is the case with any identity, the outsider perspective plays a role.

"They come from Israel, and they are 'read' by people who do not want them to perform. And so they perform, and we look at them through these glasses and ask ourselves, 'Is this Jewish, Israeli or even totally colorful world music? Right now, is this queer music from a dancefloor context?' It all comes down to the question."

In taking a broad, inclusive approach, the Shalom Music festival has created a line-up that spans the Middle Ages to the present day, features countless styles of music and prompts the audience to reflect on their own idea of what Jewish music can be. So what finally unites the festival's musical panorama? For Höft, it's quite simple: "Only the title. Only the perspective."