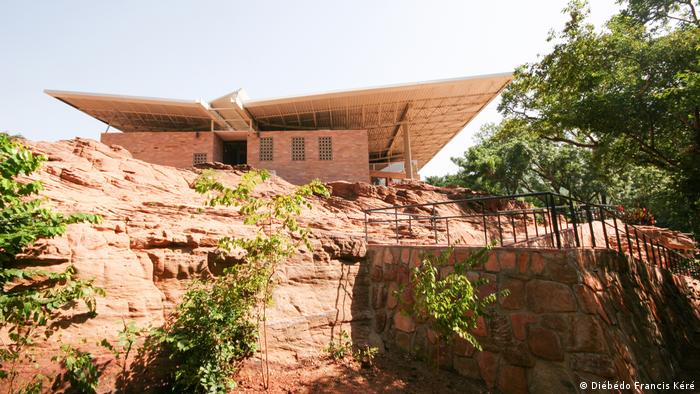 Sustainability meets poetic expression in Francis Kere's works. The Burkina Faso-born architect creates designs for and with local communities. "In a world in crisis, amidst changing values and generations, he reminds us of what has been, and will undoubtably continue to be a cornerstone of architectural practice: a sense of community and narrative quality," stated the Pritzker Prize jury.

"For a better future for all of us, not just in Africa, but for all of us on this planet, it's important to go back and actually use only those materials that nature gives us freely and to stop over-exploiting them," architect Diebedo Francis Kere told DW in February, discussing his designs for the Goethe-Institut in Senegal.

This approach is exactly what earned Francis Kere the Pritzker Prize, often referred to as the "Nobel Prize of architecture." By winning the award, the Burkina Faso-born architect also became the first African to win the honor in its more than 40-year history. The Pritzker jury praised his "pioneering" designs that are "sustainable to the earth and its inhabitants — in lands of extreme scarcity."

Kere "empowers and transforms communities through the process of architecture," designing buildings "where resources are fragile and fellowship is vital," the jury's statement added. "Through his commitment to social justice and engagement, and intelligent use of local materials to connect and respond to the natural climate, he works in marginalized countries laden with constraints and adversity," the organizers of the award also noted.

Kere was born in 1965 in Gando, a Burkina Faso village of about 3,000 residents, in a family of 14 children. At an early age, he was sent to a neighboring town to learn traditional building techniques. Through a scholarship, he moved to Germany, and started studying architecture at the Technical University of Berlin in 1995. He is meanwhile a dual citizen of Burkina Faso and Germany. The first building he designed, a primary school in his home village, was recognized with the prestigious Aga Kahn Award for Architecture in 2004.

A building with a modern design, its bricks are the same color as the earth. His pioneering approach was to return to traditional techniques. Instead of using concrete, a widespread but expensive material for building schools in Burkina Faso, Kere worked with local resources, building with clay. Long dismissed as the "poor people's building material," earth constructions are better suited to the Sahel's climate than concrete buildings, which become intolerably hot.

Projects multiplied for his architectural practice, Kere Architecture, which he founded in 2005 in Berlin.

In 2017, Kere became the first African architect to design the Serpentine pavilion in London's Hyde Park, a prestigious assignment given to a world-famous architect every year. He was also one of the architects behind Geneva's International Red Cross and Red Crescent Museum and has held professorships at the Harvard Graduate School of Design, Yale School of Architecture and the Swiss Accademia di Architettura di Mendrisio, along with solo museum shows in Munich and Philadelphia.

Reacting to the Pritzker Prize, Kere told press agency AFP that he was the "happiest man on this planet" to become the 51st recipient of the prestigious accolade. He said that he is "totally convinced that everyone deserves quality" — not only the rich. "This is my way of doing things, of using my architecture to create structures to serve people, let's say to serve humanity."