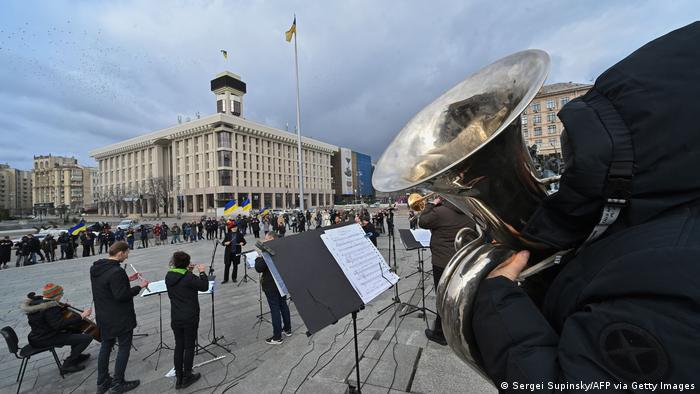 Ukrainians were surprised by an impromptu concert on March 9 on Maidan Square in embattled Kyiv: The Kyiv Classical Orchestra, in thick coats in the freezing cold, played Ludwig van Beethoven's "Ode to Joy" from his Ninth Symphony, with the famous line, "All people become brothers, where your gentle wing abides." It was an action for peace, an appeal to humanity, conductor Merman Makarenko told the German Tagesschau news program.

The "Ode to Joy" is not only intangible UNESCO cultural heritage, but also the European anthem. On March 10, it was also played on many European radio stations as an act of solidarity for peace in Ukraine.

Making music together for peace

The proceeds are to be donated to aid organizations for Ukraine. "Renowned artists have joined forces to send a widely audible signal for peace and freedom and to protest against the attack on Ukraine in violation of international law with the means of music," DSO writes on its website. Claudia Roth, minister of state for culture, has been invited as a guest speaker at the event.

No boycott at all costs

Salzburg Festival artistic director Markus Hinterhäuser is opposed to a general boycott of Russian musicians. Russian artists should be supported instead of ostracized, he told German news agency dpa.

In an interview with Austrian broadcaster Österreichischer Rundfunk, he also argued that one cannot demand that all artists take a stand for or against Putin. "We don't even know what situation many artists are in. It has nothing to do with opportunism or bowing to Putin in any way, it can also be naked fear for life," he said, adding that every case must be considered individually.

Following the Russian invasion of Ukraine, many orchestras and organizers parted ways with Russian musicians, with the most prominent cases being conductor Valery Gergiev and star soprano Anna Netrebko because they did not clearly distance themselves from the invasion.

Since September 2021, the Berliner Philharmonic has been a UN Refugee Aid musical partner. Russian principal conductor Kirill Petrenko spoke out against Putin's actions immediately after the Russian invasion of Ukraine. In a video message accompanying an appeal for donations on its homepage, the orchestra plays "Silent Music" by Ukrainian composer Valentin Silvestrov.

Members of the orchestra stand united

The Bamberg Symphony Orchestra, too, aims to send a sign of solidarity with the Ukrainian avant-garde composer's music. Musicians from more than 20 nations, including Russians and Ukrainians, play with the orchestra.

These days, the orchestra opens its concerts with Silvestrov's "Prayer for Ukraine." "With this war, the main principle of freedom and self-determination of people everywhere in Europe is under attack," Czech chief conductor Jakub Hrusa said in a statement. "Prayer for Ukraine" was written in 2014, when Russia invaded and annexed the Ukrainian peninsula of Crimea.

Ukraine-born Eduard Resatsch, the Bamberg orchestra's cellist, composed "Ukraina: to the victims of war" in reaction to the Russian invasion of his home country, where his family still lives.

The German Orchestral Association (DOV) urges its members to begin every concert with Resatsch's work in protest against the war. "Knowing that there is this sign of solidarity from many orchestras fills me with great gratitude," Resatsch said in the DOV announcement. In addition to prayer sounds, his work includes hints at the Ukrainian national anthem and the European anthem.

On February 24, Ukrainian conductor Oksana Lyniv and the Youth Symphony Orchestra of Ukraine were among the first to stage a musical protest against the attack on Ukraine. Germany's Federal Youth Orchestra, which has often played with Ukrainian musicians, is calling for donations for its partner orchestra, in particular money and medicine.

"We invited the Youth Symphony Orchestra of Ukraine to perform at the Bach Festival in June. At the moment, however, it is not foreseeable whether and how a concert by the orchestra will eventually take place," said Leipzig Bach Festival artistic director Michael Maul.

Its founder and conductor, Oksana Lyniv, was hugely celebrated at last year's Bayreuth Festival; she was notably the first woman in the festival's history to stand at the conductor's podium.

"Perhaps we can get some members of the orchestra together with the St. Thomas Boys Choir," Michael Maul told DW, adding he wants to help the highly talented young people.

"Some members of the orchestra are currently defending their country gun in hand, others are hiding in bunkers, still others are on the run — the Slovenian Youth Symphony Orchestra has offered them refuge in Slovenia," said Maul.

The Bachfest plans to stream a concert by the Calmus Ensemble from St. Thomas Church on its own channels on March 21, Johann Sebastian Bach's birthday. "The proceeds of the concert will be donated to the Ukrainian Youth Symphony Orchestra and their families," Maul said.

The German Music Council, the umbrella organization of German music institutions, has drawn up a list of benefit concerts and aid organizations to which orchestras can forward donations.