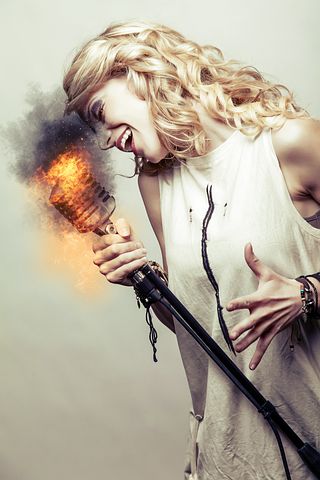 Taylor Swift walked away with big wins including best artist, best video, best longform video and best pop at the MTV Europe Music Awards that took place in the German city of Düsseldorf on Sunday.

The 32-year-old made a surprise appearance at the show and personally accepted the prizes. Accepting her first award on Sunday night, she said: "The fans are the only reason any of this happens for me."

Speaking about her music video "All too Well," which won the award for best longform video, Swift said, "I felt like I learned so much about how making film can be a natural extension of my storytelling." The video draws inspiration from the 1970s, showing a disintegrating romantic relationship that, beyond memories, only leaves a scarf behind.

British star Harry Styles was the other favorite with seven nominations, but only won the prize for the best live act. Other stars like Lady Gaga and Ed Sheeran also left empty-handed.

Ukraine features in the show

French DJ and record producer David Guetta won the best electronic award, as well as the prize for best collaboration with Bebe Rexha for their song "I'm Good," which was also the opening performance on Sunday's show. The musicians revealed that the song was almost not released: "We had no idea that it was gonna blow up and be so viral on TikTok. And here we are performing it and nominated for Best Collab," Rexha said onstage.

The British band Muse won in the best rock category for their song "Will of The People." Lead singer Matthew Bellamy said the group was dedicating the prize to the people of Ukraine and Iran. Ukrainian band Kalush Orchestra, who won the Eurovision Song Contest with "Stefania," held a moving performance, with frontman Oleg Psyuk saying they were trying to support and spread awareness about the war in their country with their new-found fame.

"It's important for us to be a voice of Ukraine, to have the opportunity to be all over the world, to perform and to say about Ukraine, to say about war, to say about our culture, a culture that fights against war," he said. Ukrainian women Lina Deshvar, Anna Kutova and Anfisa Yakovina also won in the Generation Change category for humanitarian help.

The MTV Europe Music Awards (EMA) are the European edition of the US MTV Video Music Awards and are held since 1994. European cities alternatively host the shows and the country organizing the awards gets to nominate one domestic group as best performer. Artists are nominated by musicians of MTV Europe and the audience determines the winners through televoting.

2021 winner rapper Badmomzjay was crowned the best German act on Sunday evening. "It feels crazy because we've written history," the singer said, adding that winning twice in a row was absolutely great. The artist says she wants to create a fan base in her own country but is now thinking of an international career.

Germany last hosted the EMAs in Frankfurt in 2012. This year's host city, Düsseldorf, has a rich cultural tradition and is home to the pioneering electronic band, Kraftwerk, which became famous with songs like "Autobahn."