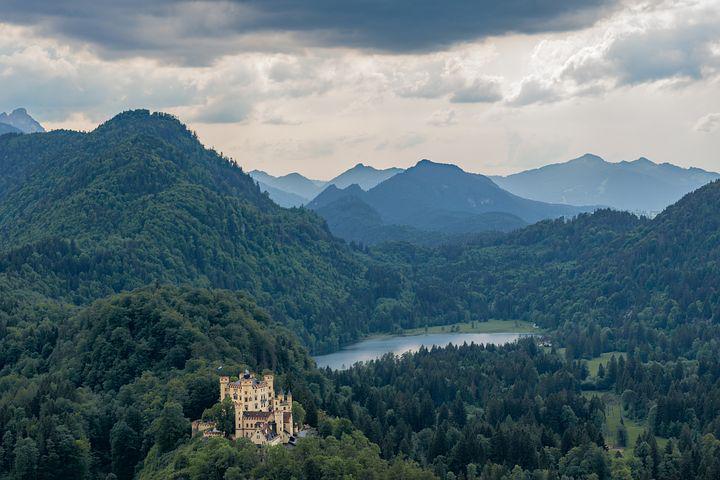 This aspect is so important, as any real estate agent will tell you, it's worth repeating. Schloss Elmau definitely fulfills these three criteria. The castle is located in Germany near the Austrian border — about 100 kilometers (62 mi) south of Munich in one of the most beautiful regions of the Alps. Its remote placement makes it perfect for those seeking peace and quiet — and heads of state.

Even when the sun is not shining, the landscape is radiant. Everywhere on the spacious grounds guests can find sunbeds and umbrellas, where you can enjoy the landscape in peace. The main house is aptly named "The Hideaway," for its retreat-like quality. But there are also plenty of hiding places on the grounds.

No fear of overcrowding

The name "The Hideaway" also fits well because, according to the hotel, only about 35 percent of the space can be rented, which is rare for such a large hotel. The majority of the space is public space, which is why Schloss Elmau never seems overcrowded. This lounge (pictured) is one of the public areas, and there is also a library, bookstore, clothing store and more.

Schloss Elmau also has a concert hall where more than 200 concerts a year are performed, which the hotel says makes it one of the largest concert organizers in Germany. One unique aspect is that the musicians who perform here do not receive payment, but can stay in the castle for free. This is what the hotel calls "play to stay." Guests, then, can also enjoy the concerts for free.

A wooden bench with history

This picture went viral during the last G7 summit at Schloss Elmau in 2015. It shows then US President Barack Obama sitting on a bench while former German Chancellor Angela Merkel seems to be explaining the ways of the world to him — or perhaps showing him how big the bench is. These days, the bench in front of the hotel has become a popular photo spot.

One thing that's not in short supply at Schloss Elmau is an elephant motif, which can be found on fabrics, coasters and more. Castle owner Dietmar Müller-Elmau discovered an Indian fabric with an elephant motif in the corner of a store and was enamored by it. Having lived in India, he knew the elephant was a symbol of good judgement and memory and set out to incorporate it into the hotel's design.

What's with the small tables?

With a total of nine restaurants, Schloss Elmau has something for every taste. The crown jewel is the Michelin-starred Luce d'Oro with chef Christoph Rainer. In addition to meals of up to 12 courses, and every attention to detail is paid. Each table even has a smaller table just for handbags.

Even if this domed room of the Oriental Hamam looks spartan, the entire spa area of the bathhouse is far from it. It's the main room of the 500 meter (5400 sq ft) Oriental Hamam which has four treatment rooms, three domed rooms, two steam baths, an Oriental Tea Lounge and massage treatment options. After all, G7 conversations are sure to prompt a need for some world leaders to take a breather.

A hotel in a hotel ideal for the G7

In 2015, Schloss Elmau launched its G7 optimized hotel within a hotel, called "The Retreat." Located 100 meters (328 ft) away from "The Hideaway," it's approximately half its size with 47 suites, and offers the chance for world leaders to be among themselves. At the G7, each head of state and government gets a handful of rooms for themselves and their aides. The rest stay at "The Hideaway."

With views like this, there's no need for a TV

With impressive views of the Wetterstein mountain and valley from windows on three sides of each bedroom, in "The Retreat," watching TV is hardly necessary — although the rooms still have one. Each of the "Summit Suites" also has a living room, a hallway with storage and a smaller room. Although the hotel has plenty of unique features, it's location in nature is truly one of a kind.