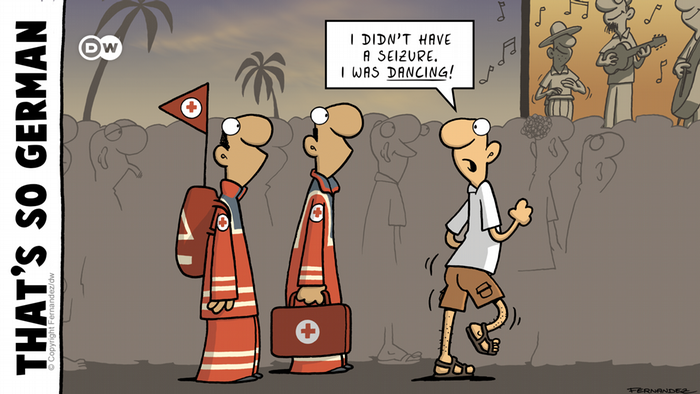 But could those adjectives describes Germans as well? Artist Miguel Fernandez pokes fun at the stereotypes and personality traits attributed to the Germans.

Germany is not a country renowned for having invented the world's most popular dance forms, but many people in the country enjoy shaking it when they hear music. In some cases, it might look a little awkward — or life-threatening — but that shouldn't stop anyone from moving to the beat.

How can you tell if someone is a German? Is German-ness even recognizable to oneself? To others? Can you tell a person is German by their certain need to be overly precise or crazy-making need for structure or their hot-blooded passion (for cars)? And is it really true what they say about German punctuality?

In search of answers to these clichés and traditions is cartoonist Miguel Fernandez, who has taken them on one at a time in cartoons drawn especially for DW social media channels.

A new cartoon from the series "That's so German..." is released every Tuesday. Taking a magnifying glass to German traditions, manners and preferences, the cartoonist has worked hard to make his drawing understandable for an international audience.

"At the very latest, when you see the title of the series, you should know that it's about Germans and their peculiarities and so it should be clear what the meaning behind the cartoon is," says Fernandez.

On his other projects, which are primarily intended for a German audience, the artist says he knows "what to expect of readers, because they have the same experiences I do. When it comes to people from completely different cultural backgrounds, I can't say whether they know whether this or that is a German peculiarity. I really have to fall back on those things which are well-known."

Among those clichés that Fernandez draws on are the German love for garden gnomes, for fast cars and the country's incredible selection of bread and rolls — things which both Germans and foreigners can smile about.

Miguel Fernandez takes on those everyday areas of life with a sharp eye. "You can't walk through the world waiting for an idea to fall at your feet, it doesn't work. The cartoons must always be so overdone or so far away from reality that you would rarely encounter anything like it in real life. That's finding the muse."

A career as tax clerk

The 44-year-old got his start in a completely different way, apprenticing as a specialist assistant in tax and business consulting. "I was probably the worst trainee they ever had," he laughs.

"It just didn't work for me. I woke up with a bellyache every morning and had this urgent thought that I had to do something else." When one day there was trouble with the boss, suddenly everything became clear. Miguel Fernandez quit his job, finished his high school diploma, did his year of community service and went on to study visual communication.

"I'm not an advertising person," Fernandez says about his studies, "but I really took a lot with me, especially from the illustration courses." His thesis was a book of comics that went on to be published. But Miguel preferred cartoons. "Only very few people can make a good living from comic books and I just like cartoons better, it's funner and I'm much happier doing it."

If it's true that Germans are always on time, why are the trains so late?

The comedy of the German everyday

His Spanish uncle was good at sketching, something which impressed the young Miguel when he visited him on his summer holiday. And in the 1970s and 80s, he devoured the comic books that were popular in Germany: MAD, Kowalski, as well as Werner comics and Clever&Smart.

To date, several dozen of his books of cartoons have been published. He has likewise produced entire series of cartoons, like the "Geschafft!" series, in which things are named that you no longer have to do — as a man; as a single woman; as a dog; or after the age of 25 — or that you are now allowed to do — as a grandmother; after receiving your high school diploma; or once you own your own home.

The topics are personal and close to his heart, but they also have to remain socially relevant. "I want to reach a lot of people and make them laugh," says Fernandez. "I enjoy it when I get an e-mail from someone who has seen a cartoon on the internet and thanks me for making him laugh. That's a nice thing."