What to know about Berlin's Olympic Stadium 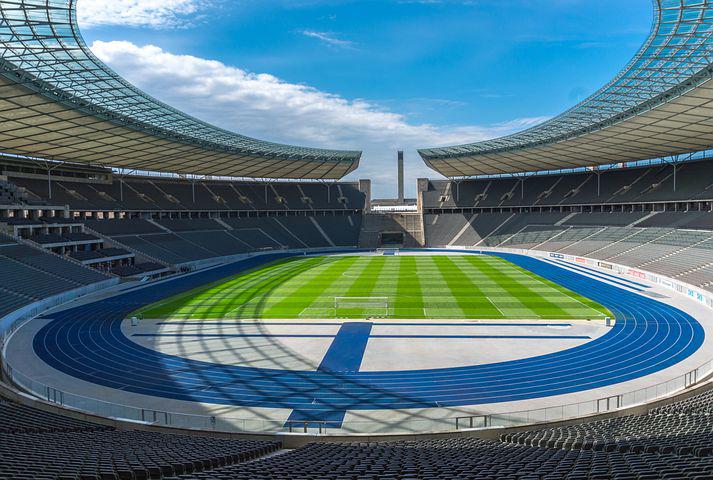 Alongside the Bundesliga championships, the DFB German Cup is the Bundesliga's second-most important title. It includes clubs from both the first and the second Bundesliga, as well as qualifying clubs from lower leagues. Since 1985, the final of the DFB Cup is played at Berlin's Olympic Stadium. This year, SC Freiburg and RB Leipzig will compete for the trophy.

The monumental stadium is situated on a large expanse of land at the western edge of Berlin. Even today, it's still dominated by the unadorned facade faced with dressed limestone. With its five rings, the 15-meter-wide (50-foot) Olympic gate at the entrance recalls the arena's original purpose.

The stadium was built for the 1936 Summer Olympic Games. Adolf Hitler, who had become chancellor of the German Reich several years before, was keenly aware of the importance of the Games and supported the arena's construction. At the opening on August 1, he staged a major propaganda event, marching into the stadium before a cheering crowd of 110,000 spectators.

To this day, visitors to the adjacent Mayfield Bell Tower can enjoy a view of the stadium grounds and the city beyond. But this tower is a reconstruction dating from 1962 — the first structure was destroyed in the war. The original bell, which was the emblem of the 1936 Summer Games, was also destroyed. Today the tower is both a memorial and a viewing platform.

After years of economic revival in the Federal Republic of Germany, the Bundesliga soccer league was founded in 1962. Beginning with the first 1963-1964 season, the Olympic Stadium was the arena for Hertha BSC's home matches, here shown playing their first match against FC Nuremberg. Berlin fans are traditionally seated in the eastern end of the stadium.

After Germany got the nod for the 2006 FIFA World Cup, Berlin's Olympic Stadium was given an overhaul. Alongside many technical renovations, all 75,000 spectator seats were covered by a roof. The surrounding athletic track was changed to blue and white, the colors of the Hertha BSC home club.

During the renovations, a Christian chapel was built under the arena's main tribune. The German national squad is said to have attended a service here before the 2006 FIFA World Cup Quarterfinal match against Argentina — a match they won in a penalty shootout. But it's not just athletes who make use of the chapel. True-blue Hertha fans can celebrate weddings and baptisms there.

In August 2009, the world's top track and field athletes gathered in Olympic Stadium. About 400,000 spectators attended the nine-day event in all, and millions watched at home on television. Three world records were set, as were countless national records. In 2018, the stadium was the main site of the European Athletics Championships.

Today, the stadium is one of Europe's most modern multifunctional arenas. Bands and musicians from all around the world appear here, including Irish rock group U2, who have performed several times, including in 2009 before more than 90,000 fans (above). Berlin's largest venue also has excellent acoustics.

Even apart from sporting events, 300,000 people visit the stadium each year to learn more about its eventful history. A multimedia guide is also available for visitors who want to learn more about the arena. Daily tours take in areas that are normally closed to the public, including the VIP tribune, the players' dressing rooms and the underground warmup hall.

If you want to take a dip during the summer heat, the outdoor swimming pool at the Olympic Stadium may be just the ticket. It's part of the sports complex and was also built in 1936. It features a 50-meter pool and a diving pool with a 1-meter and 3-meter diving board.